Get ready for more outrageous Oppai Battle Entertainment in the scintillating second season of High School DxD! Fans of hardcore action spiked with a double dose of fan service won’t be able to pry their eyes off the scorching supernatural schoolgirls waiting for them in Season Two. Plant yourself in front of the boob tube and watch a harem of devil hotties show you how much fun it is to be bad! High School DxD New, Season 2 Wiki

The devilish Harem King is back for more outrageous Oppai Battle Entertainment in the scintillating second season of High School DxD! Fans who like their hardcore action spiked with a double dose of fan service won’t be able to pry their eyes off all the scorching supernatural schoolgirls waiting for them in Season Two. So what are you waiting for? Plant yourself in front of the boob tube and watch a harem of devil hotties show you how much fun it is to be bad!

1 - Another Disquieting Premonition!
Issei is back with Rias and Asia living in his house, and Kiba starts acting weird when he sees a picture of a holy sword at Issei's house.
2 - The Holy Sword is Here!
Issei gets another warning about the white dragon, and church followers bearing Holy Swords pay a visit to the devils.
3 - I'll Destroy the Holy Sword!
Issei and Kiba fight the Xenovia and Irina, and Issei tries to deal with the consequences of their fight.
4 - A Strong Enemy Appeared!
Issei and the others team up with the church to fight Freed, but an even greater enemy appears.
5 - Decisive Battle at Kuoh Academy!
The Kuoh Academy students fight Kokabiel and his minions to defend their school and their town.
6 - Go, Occult Research Club!
The Occult Research Club fights Kokabiel and learns some shocking truths about the power struggle between the angels, fallen angels, and devils.
7 - Summer! Bathing suits! I'm in trouble!
The Occult Research Club takes over cleaning the pool to thank the student council for their help with Kokabiel, and Issei runs into a lot of trouble.
8 - Open House Begins!
Issei learns more about the feud between the Twin Sky Dragons and Rias and Sona have to deal with troublesome family members at Open House.
9 - I have a junior!
The other Bishop of the House of Gremory is released, and Akeno takes Issei to meet a new acquaintance.
10 - Various three-way deadlocks!
Issei meets Michael, the Chief of the Angels, and continues training Gasper in the days leading up to the Leaders' Summit.
11 - The Leaders' Summit Begins!
Time stops during the Leaders' Summit, and Issei and the others meet a new enemy.
12 - Clash of the Twin Sky Dragons!
Issei battles Vali and discovers hidden depths to his power as the Twin Sky Dragons face off.

not as good as the first. but it's ok

This was only the second anime I ever watched and this is what got me hooked onto animes myself I couldn't get enough... But we all have to wait till 2016 to get season 4 😢

It clearly took the top ten in my list anime it has a great half of drama and other half of comedy! Simply perfect.

This show was first brought to my attention after watching "Kiss x Sis," they ended that show so fast, I felt lost. So I hit the Internet for a new show, with a lot of action, ecchi, and of course comedy. This show fits every category, and completely out did itself! I just can't wait for the 3rd season to become Dubbed! I HIGHLY RECOMMEND this show to any anime lovers!

I really love this series and that it's not censored like the Japanese version is. Third season is now airing so I hope that comes out as well. I don't care if it's Japanese or English so long as it's uncensored.

ThugNugget - Favorite anime of all time

I love HighSchool DxD soooo much! It's my favorite anime though it can be a bit explicit at times the overall story of the anime is EPIC!

i can’t wait for season 3

Madmachine - And it's only getting better!!!

The second season has added everything that made the first season so awesome and then added even more to make it much better :)! Also this version of the second season is dubbed and as far as I can tell the words are the same as the subtitled version. They did an awesome job with the dubbing and with syncing as well. I am looking forward to seeing season three of the series.

Raphrocks - Its finaly out yes

Dragonkiller164 - Thanks for the anime

This another dxd of new characters of loving ladies to become with the harem king. This new anime is great and more fan service for to watch, and worth to buy if u agree

mevan883 - Better then the first season.

This show is great, just because the main character doesn't hide what he is.

Love this show, the story is decent and I like how its shaping up as it is going along. the last episode fight had me laughing more than it should have.

The plot continues on its twisty way, complete with big reveals, humor, pain, euphoria and death. Oh and there is a lot of fan service which is uncensored. The language has been Americanized. Which makes it a touch odd in places and defiantly more vulgar than a straight translation from the Japanese. However, it is not a bad dub. 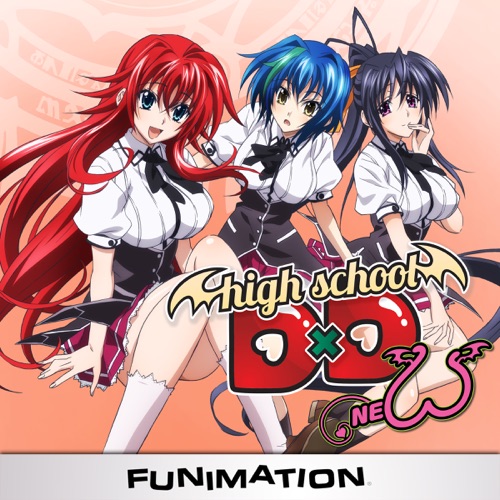