PAW Patrol is a CG action-adventure preschool series starring a pack of six heroic puppies led by a tech-savvy 10-year-old boy named Ryder. With a unique blend of problem solving skills, cool vehicles and physical humor, PAW Patrol is sure to keep preschoolers engaged as they work together to protect Adventure Bay. PAW Patrol, Vol. 8 Wiki

Pups Save a Space Rock/Pups Save a Good Mayor
Everest, the Turbots, and a Space Rock get trapped in a cave. Mayor Gooway goes missing, and Mayor Humdinger causes havoc in Adventure Bay.

Pups Save a City Kitty/Pups Save a Cloud Surfer
Cali gets lost in the woods. Daring Danny X's harness loosens while kite-surfing.

Pups Save A Sleepwalking Bear/Pups Save Dude Ranch Danny
The pups need to get a sleepwalking bear back home before he wakes up.Daring Danny X takes his horse off the trail and ends up on a wild ride.

Sea Patrol: Pirate Pups to the Rescue
Carlos and Tracker get stranded on an island in the search for buried treasure.

Pups Save the Mail/Pups Save a Frog Mayor
The postman's truck gets stuck in the mud, and the mail gets stuck in a tree! Mayor Goodway turns into a frog!

Pups Save Francois the Penguin/Pups Save Daring Danny's Hippo
Francois and a baby penguin get caught on the other side of a carvasse. Daring Danny wants a cool pet of his own, so he can't believe his luck when a stray baby hippo finds him.

Pups Save Baby Humdinger/Pups Save a Pinata
Tracker has a dream that Mayor Humginder turns into a baby! Now it's up to the pups to find the special coconuut to reverse the spell. Alex is hosting a fun party in Adventure Bay but is heartbroken when his special pinata mysteriously disappears.

Pups Save the Kitty Rescue Crew/Pups Save an Ostrich
Mayor Humdinger makes fake emergencies for his kitties to save so they appear better then the PAW Patrol. The Wingnuts get a new pet ostrich, but it gets lost on the trip home.

What do you think PAW Patrol, Vol. 8 tv serie? Can you share your thoughts with other peoples? 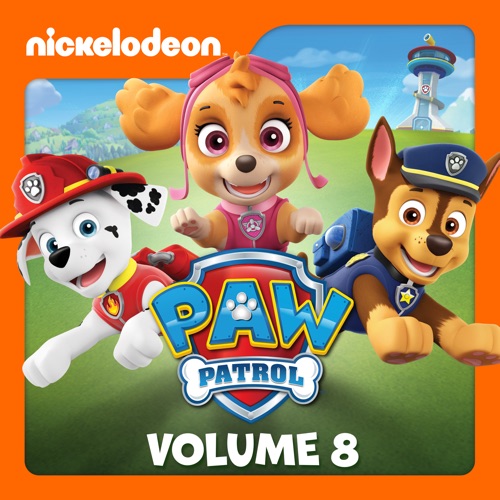