It’s 3 barks for Halloween in these 8 spook-tacular PAW Patrol missions! See how the pups cast a web to track down a candy thief, solve the mystery of the Werepuppy, stop a mischievous ghost, explore a haunted cabin and more ghoulish fun! PAW Patrol, Spook-tacular Rescues Wiki

Pup Save the Trick-or-Treaters/Pups Save an Out-of-Control Mini Patrol
It's Halloween in Adventure Bay, and a mysterious kid in a giant spider costume is taking all the treats from the Trick-Or-Treaters!

Pups and the Werepuppy/Pups Save a Sleepwalking Mayor
Rocky goes missing at Uncle Otis's cabin, and the PAW Patrol needs to solve the mystery of the Werepuppy!

Pups Save a Ghost/Pups Save a Show
A mysterious Ghost is causing havoc around the Lookout at night. / The Pups are going to put on a Medieval play in town square, but Cap'n Turbot's castle stage prop ends up collapsing and trapping him!

Pups Save a Sniffle/Pups and the Ghost Cabin
A sick day for the PAW Patrol? While Rubble and Ryder search for Farmer Al's runaway pigs, Marshall cares for his sniffly pup pals! First Rubble's lunch disappears, then Jake's lunchbox walks away! Could it be a... ghost?!

What do you think PAW Patrol, Spook-tacular Rescues tv serie? Can you share your thoughts with other peoples? 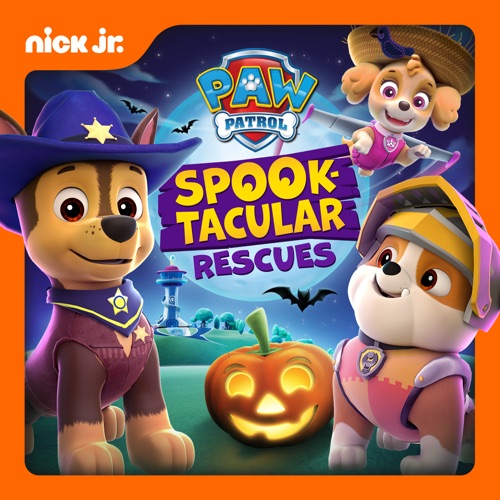