PAW Patrol is a CG action-adventure preschool series starring a pack of six heroic puppies led by a tech-savvy 10-year-old boy named Ryder. With a unique blend of problem-solving skills, cool vehicles and physical humor, PAW Patrol is sure to keep preschoolers engaged as they work together to protect Adventure Bay. PAW Patrol, Vol. 13 Wiki

Mighty Pups Charged Up: Pups vs. Three Super Baddies
Harold, Ladybird, and the Copycat team up, and the three super baddies take the Mighty Pups' mighty meteor! The Mighty Pups must get their meteor back and Charge Up to stop them before the team of baddies destroys Adventure Bay!

Pups Save an Antarctic Martian/Pups Save the Maze Explorers
Travelling Travis is on another great adventure when he lands in Antarctica but believes he's actually on Mars! Mr. Porter and Alex go on a sightseeing hike but get trapped inside a huge maze! The PAW Patrol must find the maze and their friends!

Pups Save a Waiter-Bot/Pups Stop a Pie-Clone
Mr. Porter's new high-tech waiter robot helps around the café, but it can't stop cleaning! It's up to the pups to clean up the mess all over town! Mayor Humdinger creates a cyclone of delicious pies! The pups must stop it before the town is covered.

Dino Rescue: Pups and the Lost Dino Eggs
When a lost world of dinosaurs is discovered, Mayor Humdinger wants to take dino eggs back to Foggy Bottom, but along the way a baby Brachiosaurus ends up in dino-sized trouble! The pups are ready for a Dino Rescue!

Pups Save a Big Bad Bird Crew/Pups Save a Soapbox Derby
Myrna the Mynah bird leads her new feathered friends astray. Adventure Bay is holding a "kids only" soapbox derby race, when a mysterious newcomer named "Hum-Kid" shows up and starts breaking rules!

Pups Save the Skydivers/Pups Save the Cupcakes
Mayor Goodway and Farmer Al are ready for a day filled with Skydiving fun, but their adventure is quickly derailed. It's PAW Patrol to the rescue! Alex and the Mini Patrol get locked inside the flounder, the PAW Patrol dives in to save the day!

Dino Rescue: Pups Save a Hum-Dino
Mayor Humdinger takes his Kitties to the Dino Wilds for some Dino acting lessons, but instead finds himself on top of a runaway Brachiosaurus bound for Adventure Bay! Now it's up to the pups to save the town before the Dino stomps all over it!

Ultimate Rescue: Pups Save the Pupmobiles
Mayor Goodway honors the PAW Patrol with the Key to the City. But Sid Swashbuckle and his trusty pirate pup Arrby swipe the key. Ryder calls for an Ultimate Rescue as the Pups team up, Police style, to solve the mystery and stop those pesky pirates.

Pups Save a Jungle Miner/Pups Save Uncle Otis From His Cabin
Uncle Otis takes a trip to a lost gold mine. After wandering off course, Ryder and the Pups must save him from the booby-trapped mine. Uncle Otis installs a Smart Home 3000 in his cabin that ends up trapping Uncle Otis and Mr. Wingnut inside!

Pups Save a Rocket Roller Skater/Pups Save Ryder's Surprise
A mix-up delivery leads to Ms. Marjorie and Danny speeding out of control in Adventure Bay. Now the Pups must rescue them. Ryder's present ends up in the jungle and Carlos is trapped in a Jungle Gym. It's up to the Pups to save the gift and Carlos.

Pups Save Election Day/Pups Save the Bubble Monkeys
When Mayor Humdinger runs for Mayor of Adventure Bay, his Mayor Mobile runs out of control, the Paw Patrol must save the day! Ryder and the Pups visit Tracker and Carlos in the jungle, a group of monkeys find themselves in sticky bubble trouble!

Pups Save the Chalk Art/Pups Save the Hot Potato
The Mini Patrol and the Pups race to the rescue to save a local mural before the rain comes. Farmer Al and Yumi find out their garden is full of holes and their one of a kind potato is missing. Now the pups must find the potato thief!

Dino Rescue: Pups Save a Tromping Triceratops
Mayor Goodway takes a selfie with Chickaletta, startling a Triceratops into tromping right toward the Raptor nesting grounds. It's a Dino Rescue to save the eggs and stop the stomper!

Dino Rescue: Pups Save a Baby Stegosaurus
Humdinger swipes the Dino Patroller and endangers a school of baby stegosaurus. It's up to Ryder, Rex, and the Pups to come to the Dino Rescue!

What do you think PAW Patrol, Vol. 13 tv serie? Can you share your thoughts with other peoples?

Kit Karamak - Neither sexiest nor racist; wholesome for kids!

Why is there any only one episode for this season? 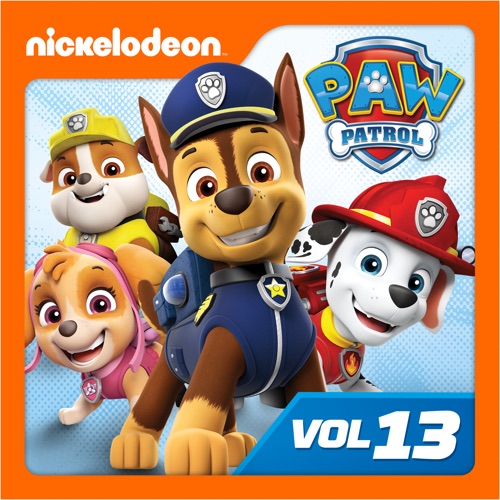