From executive producer Steven Spielberg, it's a new generation of toonsters searching for fun, adventure and mischief in the land of "anything can happen." Join Buster, Babs, Elmyra, Plucky and the rest of the gang for their "Looney Tunes" studies class at Acme Acres Looniversity — instructed by old-school favorites and featuring a mix of original stories, film, and TV parodies and modern remakes of classic Warner Bros. shorts. The fun starts now, right here on iTunes.

Not that funnyIt's just like loony tunes, but less loony. now animaniacs is beyond hilarious! you have to admit that some of theese episodes are crap like rock'n roar. buster gets a dinosour, so what! it's pointless!.CodebillyScore: 3/5

Water Go Down Da Hole...I absolutely loved this show growing up, and finally I can call them up to my hand whenever I want now. Thank you iTunes for putting up something that was and remains today to be the second best Looney Toons. Who can forget the antics of Buster, Babs, Plucky, Hamton, and the rest? I can't, and after watching this, neither will anyone else..ToutelebonheureScore: 5/5

LOVE THIS SOOO MUCH!!!!!This is a great idea of puting tiny toons on itunes its like bringing back the classics! i think we sould have more of these shows in itunes like sesaon 2 of tiny toons and other sesons of other shows like sylester and tweety mysteries=) that would mean a lot to us classice cartoon lovers!!!!.Loveing itScore: 5/5

Were tiny were toony & I'm loving it!!!!At last the Tiny Toons are out on i-Pod! Truly a LOL laugh riot these toon will make you quadruple over wuth laughter! The best episodes on season one are test stress,it's BUSTER BUNNY TIME, & A ditch in time! Truly funnnny!!.Bigg3469Score: 5/5

Terriffic Show!!I love the little tiny toons. They are so funnny!! Who would not like this show?.PerrichanScore: 5/5

Tiny toonssssss ! Ive been waiting since the dvd release for this. simply amazingggg.RichReskScore: 5/5

Need Season 2!!I want the Season 2 episodes in a bad way! That was when the Baby Plucky episodes started that are so classic and cute..Jmine83Score: 3/5

Love themGrowing up in the 90s is a blessing. we grew up with some of the best cartoons ever. I cnt wait to actually view all of the episodes. :).DarsalScore: 5/5

I would put 2 million stars if I couldI have been drooling for someone out there to get Tiny Toons either in iPod or DVD format. I loved them as a kid, and I still do today. This is a quality cartoon compared to some of the junk that is being shown to kids these days. Keep it up iTunes!!!!.MadameclawsScore: 5/5

The best everI don't get why some one wouldn't like this show it's because of this show animaniacs was created.Kid cartoonScore: 5/5

Follow the adventures of a group of young cartoon characters who attend the Acme Looniversity to become the next generation of characters from the Looney Tunes series.

A cartoonist pressured to come up with a new cartoon creates a pair of twisted rabbits and gives up. His creations, abandoned in the studio, begin their own line of looney toons.

A Quack In the Quarks

Includes "Spectacular Day," "Devil Doggie," "Optical Illusion" and "Win, Lose Or Kerplowie." Buster and Babs are replaced by the Wheel of Comedy, Elmyra adopts Dizzy in the misperception he's a puppy, Furrball's confused when he picks up 3-D glasses and Buster interferes with a rigged game show.

Includes "Never Too Late to Loon," "Lil' Sneezer" and "To Bleep or Not to Bleep." Plucky tries to cheat on a math exam, Sylvester gives Furrball an assignment to catch a mouse, and a swearing Rooster asks Buster to help him get a date with Shirley.

A satire of "The Mickey Mouse Club" sees Buster suffering at the hands of a pumped-up Arnold at the gym in "Buffed Bunny," Dizzy receiving justice at the hands of fate after squashing bugs in "Squish," and Babs driving away all her friends with her dead-on imitations in "Born to Be Riled."

Babs runs away to Wackyland when no one appreciates her great imitations, and is pursued by Buster, Hamton and Plucky.

Journey to the Center of Acme Acres

Buster and Babs set out to set out to rescue Hamton and Plucky from a crevice left by an earthquake and discover the source of the recent tremblings of the ground.

Stuff That Goes Bump In the Night

Buster's poltergeist comes back to haunt Montana Max after he drops a house on the rabbit in "Home Wrecker." Elmyra's pet-of-the-month club delivers a vampire bat in "Fang You Very Much." And Hamton faces off against a mosquito in "Easy Biter."

The gang spoofs Howdy Doody in "Buster Bunny Bunch," the Roadrunner/Wiley Coyote competition in "Bag That Bunny," Robin Leach in "Lifestyles of the Rich And Rotten" and classical music in "The Anvil Chorus."

Looking Out for the Little Guy

Elmyra adopts Sneezer when he's left on her doorstep in "Awful Orphan." Plucky tries to stop Montana in "The Re-Return of the Toxic Revenge," and a dog tries to protect baby chickens from the prowling Furrball in "Bird-Dog Afternoon."

A flea makes a courageous journey to find his family in a spoof of "An American Tail."

Buster goes on a mission to stop the mutant experiments of Dr. Gene Splicer.

Furrball pretends to be a dog when he meets a blind couple who hates cats in "K-9 Kitty." In "Aroma Amore," a paint stripe down Furrball's back attracts Fifi. And in "Cross Country Kitty," Furrball repeatedly crosses America to thwart Mary's efforts to keep him from eating Sweetie.

A "Twilight Zone" spoof including "A Walk On the Flip Side," where rabbit-hating Montana wakes up as a bunny; "A Bacon Strip," in which Hamton is duped into skinny-dipping; and in "Senserely Yours, Babs," Babs loses her sense of humor.

Hamton takes Plucky and the Bunnys to a fancy restaurant in "Whining Out," Max tries to bilk Buster in "Paper Trained," and Babs fights smokers in "Butt Out."

Elmyra captures Buster, who must bust out of her cuddly prison.

Buster and Babs browse the huge selection of films at their local theatre, including "Superbabs," "Duck Trek" and "Pasadena Jones."

Plucky tries to fix the rigged "request day" machine. Includes "Debutante Devil," "Slight of Hare," and "Duck Out of Luck." Part 1 of 2

Max frames Buster, who gets sent to prison with his lawyer, Plucky.

A "Citizen Kane" parody. Hamton is a reporter who tries to uncover the meaning of Montana Max's uttered "Acme."

Wake Up Call of the Wild

The Bunnys consider instinct and their relation to the wild creatures. Includes "Migrant Mallard," "It's a Jungle Out There, and "Kitty Cat-Astrophe."

Buster and the Wolverine

A parody of "Peter and the Wolf."

Dizzy and Hamton are "The Weird Couple," Plucky takes on Monty's polluting factory in"The Return of the Toxic Revenger" and Hamton clings to his diet in "Little Cake of Horrors." Part 2 of 2

Plucky goes to Hollywood to sell his script.

Plucky, Hamton and the Bunnys go abroad for a tour of Europe.

The Wacko World of Sports

Bjorn Bunny thwarts Max's rigged tennis tournament in "Tennis the Menace." Dizzy and Furrball try to fool Arnold in "Bleacher Bummer," and the Vanderbunnys teach Roderick and Rhubella a lesson in "Miniature Golf."

The bored toons act up on a rainy day. Max's rent-a-friend delivery turns out to be an old enemy in "Rent a Friend." A napping Babs dreams in "Bunny Daze," and the Bunnys tunnel toward Aruba but make a wrong turn in "Fur-Gone Conclusion."

The toons try to free Wackyland creatures trapped in a circus sideshow.

Concord takes over Cupid's job in "Love Among The Toons." Elmyra goes wild while cleaning house in "Elmyra's Spring Cleaning" and Plucky and Dizzy battle for prizes on a humiliating game show in "That's Incredibly Stupid."

Calamaty Coyote sees his life flash before his eyes in "Piece of Mind." Hamton wimps out of dissecting a frog in class in "Class Cut-Up." A bored Plucky uses binoculars to snoop from his hospital bed in "Rear Window Pain."

The Wide World of Elmyra

Tyrone Turtle must cross a highway to escape Elmyra in "Turtle Hurdle." Elmyra bungles her babysitting in "Drooley Davey" and friendly dog Barky Marky loses his love of fetch after playing with Elmyra in "Go Fetch."

A Ditch In Time

Plucky builds a time machine to avoid failing a class. 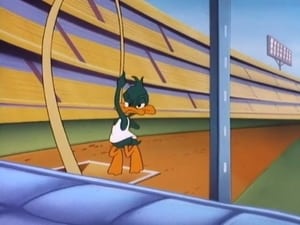 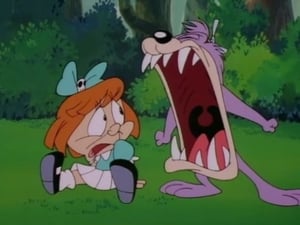 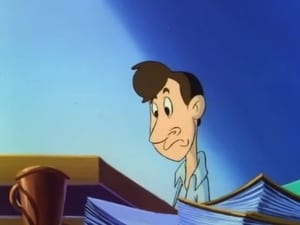 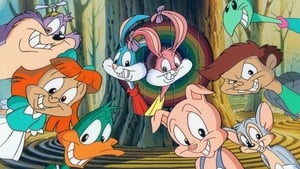 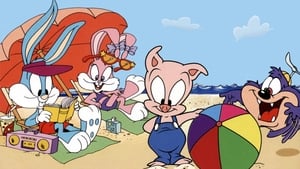 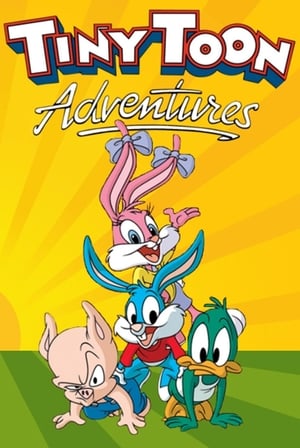 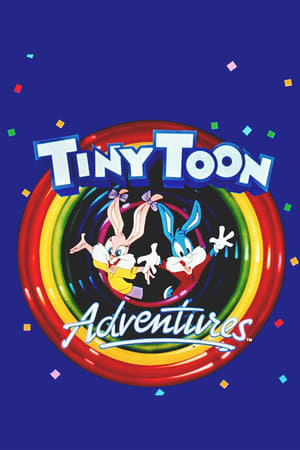 How many episodes will be in steven spielberg presents: tiny toon adventures, season 1, vol. 1?
With the season now airing in September 1990. There will be 35 episodes in season 1.

Welcome back, Toonatics, for another comic class in cartoon craziness from Acme Looniversity. All thirty of these first season episodes give us a loony look at Acme students pursuing a “hire” education as they seek part-time jobs. Go where toons have never gone before as a miniaturized Babs and Buster tour Plucky’s brain (yes, he actually has one!). Watch as game show bachelors Hamton, Plucky, and Montana Max woo the lucky (or unlucky) bachelorette Elmyra. And while waiter Plucky deals with an order for “duck a l’orange,” his other toonster friends solve mysteries, battle beasts, rock out in music videos, roll back to prehistoric hysteria ,and so much more. Prepare yourself for laughs! Gags! Anvils! And more of the cartoon fun from the Emmy-winning first season! With the Tiny Toons, it’s all for one . . . and fun for all!

Scores will be settled as Chucky's diabolical plan comes to fruition at a dangerous, public venue.

The reunion continues as tensions mount between Zack and Michaela. The experts reflect on the season and work with two of the couples to mend their broken relat...

Randy comes to terms with his role in the COVID-19 outbreak as the on-going pandemic presents continued challenges to the citizens of South Park.

Below Deck, Season 9Below Deck

As the season begins, an unfamiliar face welcomes the My Seanna crew aboard that shocks everyone. Chief stewardess Heather's frustrations build when she is conf...

With news of one last sinkhole opening, Gavin, Izzy and Dr. Nathan race to Seattle to launch a final rescue effort before it's too late.