After the Wedding Summary and Synopsis

What if a simple wedding invite ignited a series of events that forever changed the course of your life? Seeking funds for her orphanage in India, Isabelle travels to New York to meet Theresa, a wealthy benefactor. An invitation to attend a wedding ignites a series of events in which the past collides with the present while mysteries unravel. After the Wedding Wiki

After the Wedding Movie Trailer

Every family has a secret..

After the Wedding Comments & Critics

After the Wedding Movie Reviews

Or have my gums scraped, than watch this again. The only way I could possibly commend the director of this film would be if I knew he was trying to portray the majority of people as they really are, a bunch of pompous mooks.

Mipicsfly - I will watch it again!!!

I enjoyed this movie. Different but nice.

This movie was such a surprisingly beautiful story. Led by two complex and creative women, this story took me on a journey I didn’t expect. It wasn’t about judging past decisions or labeling anything as good or bad. Rather it was about accepting what is and two wonderfully complex women who had different life paths converging and collaborating to make something new and completely different. It was about how sometimes leaving people behind and moving on, can sometimes push the people we leave behind to become the people they’re meant to be. And as painful as the leaving behind can be, it can be the right thing. I didn’t expect to be so moved by this film. It was refreshing to see a portrayal of women as the complex beings they are.

This movie is loaded with the slow burn tension of a psycho killer movie. Every scene comes packed to the gills with tension and intrigue. Why? No reason. No one tells the truth. Why? The script told them to stay quite. Why is everyone always tense and afraid in every scene? Because drama! The movie takes incredible efforts to build towards a cataclysmic, or rather mundane, ordinary plain old ending. It’s like Stanley Kubrick directing Highway to Heaven or Alfred Hitchcock directing Sesame Street as a murder mystery. The actual “twist” is so incredibly bland you will be left breathless, wondering why you wasted your time. I for one had enough breath left to start laughing hysterically. It’s just a feel good movie retold as if it is a high concept thriller mixed with a pre-teen slasher. If you have ever seen those trailers that redo a classic genre film as some other genre for laughs it’s the same here only it goes on for more than an hour and takes itself very seriously. Which of course makes it all the more hilarious.

Miss Musings - Hollywood at a loss for ideas?

Why make a remake of the excellent original by Susanne Biers!!!!

Lantern at - Not a horrible movie!

I wasn’t sure if I should watch this based off the terrible scores it has, but I watch EVERY movie the three lead actors do so out of curiosity I couldn’t turn this one down either. It is a drama, but not the same story you see everyday. I really enjoyed it.

Can hollywood produce a script that isn't about unwanted pregnancies and cancer? There are lots of other human trials, challenges to write about. This script didn't go deep at all or say anything different.

I don’t understand the Rotten Tomato negativity. This is a beautiful movie with great performances by all actors.

I have never reviewed a movie on iTunes. I agree with the last reviewer. This one had significant personal meaning for me, on many levels. Very sad yet very beautiful.

I almost never write reviews...seriously. But, this film is so good from acting to the story to how it’s shot and edited. My bar is high for films. I really loved this one.

@AFP: VIDEO: Turkey is allowing wedding ceremonies again after a months-long ban due to coronavirus. But a protective mask is now obliga…

@Irina_Vukolova 😃...Also for this afternoon, My love, three tweets, will be enough. Then, of course, after the wedd…

@astudyinrenee: while we are on the subject of unlearning toxic behaviors, can the Catholic influencer crowd stop posting wedding photos…

@ABC7NY: WEDDING NIGHTMARE: What started out as a beautiful wedding photoshoot on a southern California beach quickly turned into a sogg…

my momma said no more tattoos till after the wedding

@ratdog69 @UndercoverIndi Egos are powerful things. Lead singer in my last band “unfriended” on FB the other lead…

After the Wedding Images & Pictures

After the Wedding Posters 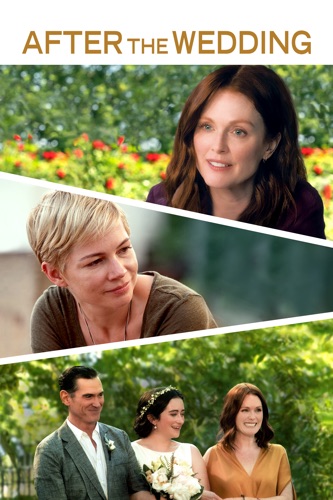