A group of firefighters risk their lives and hearts. Station 19, Season 1 Wiki

Stuck
When the team responds to an apartment fire, Captain Pruitt takes a hit, putting the future of the station's leadership is in jeopardy and forcing firefighter Andy Herrera to step up.

Invisible to Me
With the absence of Captain Pruitt, Andy and Jack try to navigate how to work together, and a car accident on a rural road puts both the victims and the crew's lives at risk.

Contain the Flame
Upon the arrival of Batallion Chief Frankel, Jack begins his first shift as co-captain and continues to butt heads with Andy on leadership styles. Captain Pruitt has a difficult time following doctor's orders and winds up back at the station to take on administrative duties. Meanwhile, the rest of the team at Station 19 responds to an attic fire at JJ's apartment building, and a call to a pool house party.

Reignited
Andy and Jack find themselves in a disagreement over spending decisions at the station. Meanwhile, the firefighters respond to a structure fire at a brand-new bed-and-breakfast, and Ryan calls Maya when he finds her brother in some trouble.

Shock to the System
Miranda Bailey visits Ben at work, meeting his new co-workers for the first time. While most of the team responds to a motor vehicle accident involving an electrical danger, Andy and Maya are paired up to go on their first stakeout.

Stronger Together
Andy, Jack, and 18 other candidates take the captaincy drill test, gunning for one spot as captain of Station 19. Meanwhile, Travis serves as acting captain while Andy and Jack are away for the day.

Let It Burn
Ryan tags along to a disaster drill training at Station 19 where he and Jack get competitive. Captain Pruitt's health weakens and Andy sticks by his side. Meanwhile, both the firehouse crew and police department respond to a strip mall fire, forcing Jack and Ryan to work together.

Every Second Counts
Ripley interviews each member of the Station 19 crew to determine whether Andy or Jack should be given the role of captain. Meanwhile, a mom's day out on a party bus takes a turn for the worst, and Captain Pruitt continues his treatment.

Hot Box
In the final days before the Station 19 captaincy is announced, Pruitt warns Andy not to be disappointed with the outcome of the race. Meanwhile, Ben gets upset with Pruitt for having told Bailey the dangers of firefighting; and the team gets trapped inside the garage of a burning house, putting several lives at risk.

Not Your Hero
Ben reaches a new milestone as a rookie and, as is tradition, receives something from the crew. Chief Ripley holds final interviews for the role of captain but is interrupted when the team is called to a massive skyscraper fire, causing several lives to hang in the balance.

Sneak Peek: Station 19
A heroic team of young firefighters from Seattle firehouse Station 19, risk their lives and their hearts while fighting fires both professionally and personally. This exciting spinoff of Grey’s Anatomy hails from Grey’s Anatomy executive producers including Shondaland’s Shonda Rhimes and Betsy Beers.

What do you think Station 19, Season 1 tv serie? Can you share your thoughts with other peoples?

did y’all REALLY expect it to be all super realistic? it’s a tv show for gods sake. it’s supposed to entertain you, not educate you.

This is the worse firefighter show I have ever seen. The story line is so inaccurate that it is completely laughable. The lead actress is is so bad it sounds like she is reading her lines. This show is so bent on the empowerment of women that it reflects horribly on real female leaders. Sorry Rhimes you really screwed the pooch on this one.

As a former professional firefighter/engineer I was embarrassed for the members of the Seattle Fire Department. Then again, since they did not work out an agreement to have a technical representative present during the filming, it's their own fault that they portrayed firefighters as a bunch of stupid idiotic morons. As for the acting; one has to wonder what the heck the producer was thinking. I've seen better acting in German soap operas.

This is worth the watch!

The show keeps you guessing and asking questions. I’m always at the edge of my seat. Truly amazing, I see the potential.

Firehouse romance, unbelievable characters, unlikely nepotism, a surgeon-turned-fireman. This tie-in to Gray's Anatomy is just too much of a stretch. And, of course, there is the expectation that popular characters will be killed off in unlikely ways. This is a Shondra show.

I started the pilot with the best hopes. To me this show fell very short. The main character comes across as whiny, untrustworthy and the acting seemed forced. After 20 minutes in, I couldn't watch anymore. I never leave bad reviews, that should tell you how much I did not like that show.

I have been in Public Safety my entire adult life and even though I’m not a big fan of firefighters, I’m embarrassed for them. I understand that realism suffers in medical, police, fire shows but wow. This is way worse than the new show 9-1-1 is. Way worse. I think the consultant either never set foot in a paid fire house and/or just read a comic book about fire departments. The writers obviously did zero research. You do not get a promotion to lieutenant because the captain wants to. It’s called civil service exams. Then school for the new rank and then you are assigned to a different house. I already lost over an hour of my life to this joke of a show, I’m not wasting more on a review that the show won’t use to help improve it. I don’t remember the actors name who plays Ben Warren but run and beg them to let you back on grays anatomy!

Firehouses all around the country are diving for cover. At least the Chicago Fire crew look like the could be firefighters. Sation 19 had everything though, a pregnant 13 or 14 tear-old (I hope she was that old) having a baby - her mom was the principal of course-and clueless - give me a break! More guys had boyfriends than girlfriends - way ta go Hollywood, that's real - in Hollywood! And the scenario for the competition for Chief via an instant promotion to LT by her dad. COME ON! I was prepared for sexy trash from Shonda, but watched anyway. Now, in the end, I am left just shaking my head. If I had to label this show I guess it would be under porpaganda or indoctrination, because it sure isn't drama.

This tv series is one my favorites now

I hope it lasts.I like it.Plus I’m a fan of the main actresses

This was great. I’ll be looking forward to seeing this on Thursdays.

This isn’t as good as Grey’s or Private Practice. BUT, it’s still rly good. Full of drama, pretty decent characters, and awesome action! 4/5💯💯🔥🔥

Been marathon watching Station 19 for this past week, from season 1 to the recently hiatus season 4.

Me getting mentally prepared to watch Season 2 Ep. 15 of Station 19

@iBrandon_Leo Station 19 is really good too! Check out For The People if you haven’t. I think it was only 1 season but it’s pretty good too. 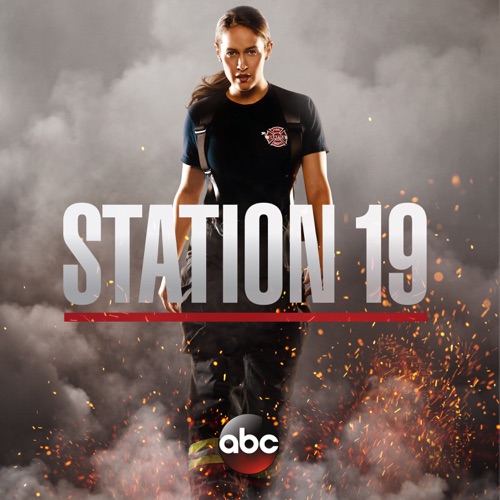