Modern Family, takes a modern and often hilarious look at the complications that come with being a family today. Jay Pritchett, with his younger wife Gloria, her son Manny and new baby, sits as the patriarch of a large blended family that includes his grown daughter Claire, who has three kids of her own with her husband Phil, and a grown son Mitchell, who adopted a daughter from Vietnam with his husband Cameron. These three families are unique unto themselves, and together they give us a window into the sometimes warm, sometimes twisted embrace of the modern family. Modern Family, Season 6 Wiki

The honeymoon is over, but the laughs continue in season six of Modern Family. As freshly hitched Cam and Mitch acclimate to the realities of wedded bliss, Phil and Claire find their marriage stressed by annoying neighbors, Thanksgiving dinner gone awry and Claire's online snooping. Meanwhile, a spy-camera drone wreaks havoc in Jay and Gloria's backyard and a close call on the highway leads to amusing changes in various members of the Pritchett-Dunphy clan.

Best show of all time!!! Make sure to watch all the seasons

Do NOT bother with the season pass for season 7. Read the reviews. Those of us who did buy passes are regretting it. It is Nov. 25 and we are all still waiting for the 11/18 episode. Meanwhile those who took their business to Amazon have been enjoying their episodes on time. iTunes has been telling people to contact ABC. We wouldn’t be so put out if we didn’t love the show so much. What a disservice to loyal fans.

BJ AS - Too awful to be true

Modern family has totally lost its touch. The characters are mean spririted, pathetic, and the adults keep getting more exasperating while the kids get more inconisderate. The show's humor makes viewers get a bad opinion of what modern suburbia culture is like, and Lily is such a bad actor. Honestly, the show has become an obnoxious pain.

Modern family is the best tv show. If u haven't seen it, you must.

I need the next season.

Modern family is a part of my life

Bravo to Modern Family, you have really outdone yourselves with the latest episode in S6, “Connection Lost”. Filmed by iPhones and shown through the screen of a Mac, this is a new height. I enjoyed it so much that I’ll have to watch it again, and I never do that with a TV show. Really pushing the boundaries and doing something new in a brave and exciting way.

Never watched this show until the episode “Connection Lost”. Other than showcasing some amazing Apple technology, I doubt I’d ever watch it again for it’s annoying content!

This only applies to this episode, because I haven’t seen the others. All Mac, very funny, I’m a mom, in tears.

I haven't seen the new season yet but based on the reviews I'm going to say it's good. I have seen the other seasons and I like them!

This is still my number one💁

Although I liked Luke and Manny better when they were younger, this season is great! Lily is brattier than ever. It’s still great, but the earlier sessions just clicked with me more, but don’t get me wrong I love this show!

I really love this show, but as a gay person I find the Mitch and Cam characters deeply offensive stereotypes.

I think it is very funny

I’m afraid this season isn’t quite measuring up to previous seasons. I’ve been disappointed in the last three episodes. :-(

Ball breaker - Father & sons: Griffi Arts for paint for hair to down to feeto

Hopefully it'll be amazing job after done with them so

I love this show so much! Whenever Im just bored this show always lightens me up! It's hilarious! Too pricey tho.

Loving season 6 so far. Each of the cast members are getting good screen time, the jokes are well timed as always, and the writing has still not slipped. By a good margin still the best comedy on television in my opinion. I do agree that there should be a bit more of a discount for the season pass however.

Kiki loves tap zoo - this show is so funny

best show ever dont listen to the h8ters👍

This show used to be very funny and relatable, but has no turned into a show used just to make a laugh here and there. It's also way too expensive.

Oh my god yaaassss! Yas yas yass! Love it! They're bringing the fun back.

I love the show and yes I will give you my money , but no discount pass??

I LOVE THE SHOW IT AWESOME YOU SHOULD MAKE MORE SHOWS BECAUSE THERE REALLY AWESOME.

gdglen - i love it and live it

This show is really good but sometimes it’s even better than that. Episode “2” is a good example of the latter.

I love this show you sode get this its the best

I love the show but what made me mad was that you ended on a cliff hanger!!!! It is really annoying. When will season 7 come out?

Gets better every season!! Hopefully there is a season 7 :)

James Blatch - How can we complain officially?

If we don't find an email address or some way to formally complain to the department in Apple which is responsible for this it will never change. I'm not a techy guy so I don't know how to do it but if someone is good at getting around the web could you please post up how we can complain effectively and have it make a difference? I think this has more to do with petty Australian TV stations cutting shifty "screw the customer" deals than Apple not physically having the episodes to release to us. How many of us have to complain before the system changes? Our act of rebellion is simple : illegal downloading of the show. Now thanks to Apple and Channel 10 the artists, users and everyone in between suffers. Never again.

MickyG-101 - Brilliant show, but where are the episodes?

Episode 9 aired in the US in early December but still isn’t available here in mid-March, not to mention the 8 following episodes. What is the point of spending such an exorbitant amount on a season pass if you can’t even watch the show within a reasonable period of it being released? Is it any wonder so many people download illegally?

It is completely unacceptable that Apple has sold the season pass of this show without having the rights to the season themselves (which is the only reason that I can see as to why I can only download 8 episodes when a lot more have aired)! I have paid for a full season and will not be purchasing season passes again for currently airing shows from iTunes if there is no guarantee that I will receive the product I have paid for. I am astounded that at least partial refunds have not been offered! Unacceptable!

Thepontess - I want my money back

I paid for a season I am clearly not going to receive. I want a refund for the unreleased episodes. Contact me.

In my oponion, Apple TV must publish the expected release date for programs, and not - in effect - take our money and then not release new episodes because of some stupid regional TV arrangement with backward desperate TV channels like Channel 10. I actually believe they may be breaking consumer law, since they take money and never give you what you paid for in a reasonable and timely manner.

HENZOOOOO - WHERE ARE THE LATEST EPISODES

Not happy at all, hasn't been a new episode for months. Apple, fix this.

bigburf - Great work keeping the season up to date

I love Modern Family it has to be my favourite television show but I bought a season pass and Apple has been holding back all the episodes!! This is completely unfair and they need to do something about this! I hope there's a way I can put in a formal complaint :(

Sltreth - Where are the latest episodes?

Absolutely pointless to purchase season pass when iTunes is months behind. Brilliant show- the star rating simply reflects my frustration not being able to get the latest episode.

Extremely disappointed!!!!!! I purchased the season pass ages ago, and since episode 8, ( months ago) there have been no further episodes available in iTunes!!!! I feel ripped off!!!! Please, please, PLEASE fix this APPLE!!!! Not happy!!!!!

This is the last time I bother buying a season pass on iTunes. So sick of paying $50 for a season and then only getting 6 episodes. How is this legal - it has been 6months!?

One of the most funniest to shows in line with the Big Bang theory. My new favourite episode is the connection lost because it shows how creative the producers can be. Keep it up!!!

The show is great but itune should not be advertising these 8as the latest episodes. It should say the only episodes we have. poor form

Fleurdesel - Where is the rest of the season ?

I bought the season pass, and iTunes didn’t add the newest episodes ! unacceptable !!!

I love modern family and have every episode up to s6 e8. But we're are the newer episodes?

It’s a fantastic show, I just wish you could download the latest episodes. What is the incentive for purchasing a season pass and downloading TV shows legally/legitimately? Absolutely none! Shame.

Because Channel 10 own the rights and unless they release it to iTunes, it will remain ‘not available’. Also- we are now in a 'non ratings’ period in Australia, so the television stations with-hold all their popular programs. It is frustrating and rude and SO out of date, Rally the tv studios for it to change.

i love modern family! season 6 is my favourite

LLove25 - falling off my chair

Every season has gotten slightly better so far which is a surprise for any TV Series so going by that Season 6 is gonna be brilliant. We hope! 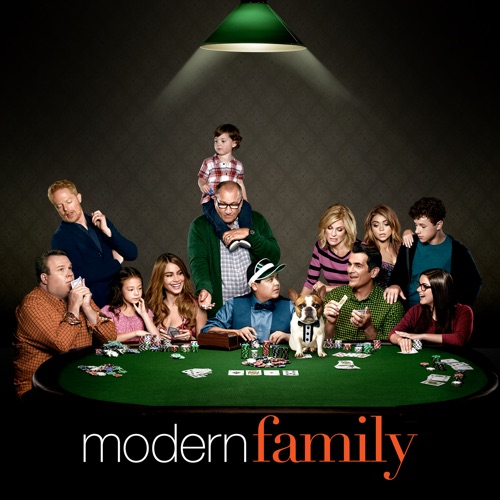