The Graduate Summary and Synopsis

This is Benjamin. He's a little worried about his future...

What do you think The Graduate movie? Can you share your thoughts with other peoples?

I’ve always wanted to watch this movie because it seemed like it was iconic. It also had such great reviews on here but I found it so disappointing. There was no point and half of it was just Dustin Hoffman driving around listening to Simon and Garfunkel music playing. Found it rather annoying and pointless.

This is so much better then fifty shades of grey, highly recommend it. This film was well written and directed

The Graduate is a suprising comedy that is well written, well choronegraphed and brillianty acted this is a film so vast and the music fits with the whole movie i enjoy movies like these but The Graduate never disappointed me (:

This movie is just absolutely remarkable in every way, and still remains a classic to this day. You can't get more iconic than this. The Graduate is flawlessly written, deftly acted, and superbly touches us with its unconventionality and ultimate power. It captures the era of the 60s, yet is also profoundly timely. Hoffman's angst is relatable for every young adult watching the film, and the nostalgia and shallowness of American suburbia is also quite relatable to anyone who has spent at least a year living in the suburbs. Anne Bancroft is just exceptional and utterly ruthless as the troubled and tragic Mrs. Robinson, making for an unforgettable performance. The film's aura--the iconic soundtrack and iconic cinematographic choices--is captivating. Ultimately The Graduate is more than a funny, nostalgic movie: it is triumphant. It is a triumph of the human mind and the human spirit.

Such a great early Dustin Hoffman movie. Love it! iTunes must have every one of his flicks... except Little Big Man. A 70's icon of a film. We need this one too! iTunes! make it available.

jctMUSE - More than a Classic, Defines an Era

The music alone defines the generation but as director Mike Nichols notes, the themes are universal - man and woman, entry to adulthood, and last but not least, becoming like ones parents, as evidenced by the last scene. See this at a college campus on their Graduation Day and feel the moment!

smart, endearing film that every person should see.

NirvanaZapata - Best Movie of All Time

This has to be the best movie I have ever seen in my life. Its got youth, sex, and love everything I am going through in my young life. Even if it was made in the 60's I can relate to this movie and so canmany of you. Its a must see movie I promise you it will not dissapoint.

Let me at least rent, I don't know if it will be one that I want to watch over and over!!

one of the greatest movies of all time a true classic

music.books.life - One of the best!

Even if you don't like the acting, don't enjoy the storyline, or find older movies dull, you cannot possibly miss the art of the filming. Beautiful filmed. One of the, if not the best movie I've ever seen. Dustin Hoffman plays a wonderfully awkward 20-year-old and Anne Bancroft is such a breath-taking actress. The movie was amazingly acted, and the storyline was portrayed perfectly. I'm not normally a fan of older movies, but this kept me wanting more. Over all, the best part was simply the camera work. It was astonishing and brilliantly done. Any movie fan needs to see this film.

Swimmerchick. You are very young. Life is going to smack you upside the head if you're not careful. Great movie!

PLEAAAASSEEE let me rent this movie!

I've seen this film at least a dozen times over the years. It stays fresh and vividly true.

Comic genius, bordering on theater of the absurd from director Mike Nichols and writers Buck Henry and Calder Willingham. The crisp, stark direction renders the telling of this story in a way that makes a movie which seems to get better with age. Dustin Hoffman and Anne Bancroft are absolutely perfect in their roles, as is Katherine Ross -- and don't miss Norman Fell as the Berkeley CA boarding house landlord whose fear of "outside agitators" (it was the 60's, after all) leads him to become deliciously suspicious of Dustin Hoffman. The precision of the written dialogue is matched by the dead pan delivery by the actors. This is truly a gem. Not To Be Missed.

A great film from the 60's with talented actors, creative writing, filming and classic music. Anne Bancroft is outstanding in this lovely role!!

Even though itunes gave the movie away doesn't mean you shouldn't watch it. this is a very good movie with great songs from Simon and Garfunkle and is recognized as a classic.

swimmrchick - The Music Was Great

While I thought the plot was kind of bland, this movie spoke to me. I think it was the incorporation of Simon and Garfunkel's amazing music. I really enjoyed the scenes where Benjamin was just driving while music was playing. It seemed kind of gloomy and depressing, but it reflected the tone of the movie. The characters also lead sad and depressing lives. Mrs. Robinson is just looking for attention, Benjamin is in love with Elaine but doesn't really have a backbone and keeps running into things to stop him from being with Elaine, and Elaine seems to love Benjamin but has conflicting feelings because of what Ben did. All in all, I think this is a decent movie and would recommend it.

What is (as far as my knowlage) the original off beat comedy, still holds up against the best comedies of today. because it has what most nowadays are lacking...Substance

huxleygirl - The plot isn't the point of the movie

The movie is about the struggle of identity in modern society. What does it mean to be a man? a sexual being? an adult? The interaction between characters is what makes the movie interesting and relevant. Don't be put off by people who haven't even seen it.

i watch good movies - this is a classic

shame to anyone who didnt like this or doesnt want to see it. this is a classic and is great in everyway. break through role by dustin hoffman. the camera angles and film editing is something you wont see in any other movie made before this one. the soundtrackis great. i dont know one person that sees this movie and doesnt listen to simon and garfunkel for about a month after. this is a must see. one of the best movies in film history.

One of my all time favourites!! Love the music too!!

This is a GREAT movie!

pto5 - One of the Greatest American Films

The Graduate is an amazing film that satirizes the generation gap in the sixties perfectly. It was wildly influential on subsequent cinema and it has a fantastic soundtrack with an introspective quality by Simon and Garfunkel. Basically, you need to see this.

thank you so much itunes for getting this movie. Its one of my all time favorites.

eeohhokyespleaseuhok - cmon bruh u know its a masterpiece, next

its the graduate bruh

this movie is disconcertingly difficult to latch on to for about the first 5 minutes. once you've got it, though, letting go is absolutely impossible. a terrific soundrack and more than real characters, this is a film everyone should try on.

Very nice movie shall i say! Very good casting and acting. The overall story is very well exploited and we just enjoying a great moment watching this movie! Recommend this to everybody! 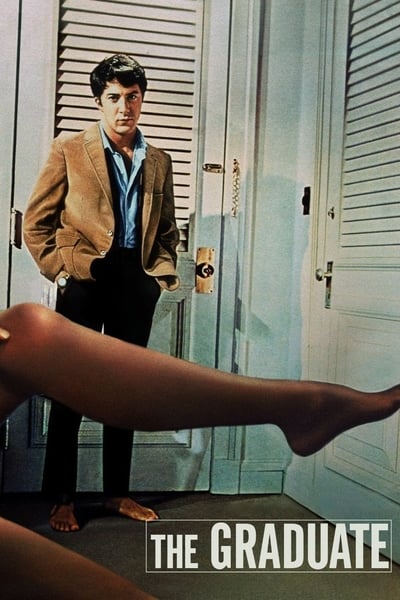