PAW Patrol is a CG action-adventure preschool series starring a pack of six heroic puppies led by a tech-savvy 10-year-old boy named Ryder. With a unique blend of problem solving skills, cool vehicles and physical humor, PAW Patrol is sure to keep preschoolers engaged as they work together to protect Adventure Bay. PAW Patrol, Vol. 5 Wiki

Pups Save the Soccer Game / Pups Save a Lucky Collar
When Mayor Humdinger challenges the Adventure Bay team to a soccer match, Ryder and the Paw Patrol are called in to play. Marshall thinks his new collar is bringing him good luck, so he takes risky chances to rescue Hootie.

Air Pups
The Paw Patrol takes to the sky in their all new Air Patroller airplane! When an active volcano spews out hot lava everywhere and threatens Franciois and Cap'n Turbot, the PAW Patrol must bring them back to safety.

Pups Save Friendship Day
While celebrating Friendship Day, the pups spring into action to prevent Mayor Humdinger from ruining Adventure Bay's reputation as the friendliest town on the map.

Pups Save Alex's Mini-Patrol/Pups Save a Lost Tooth
Impressed by the Paw Patrol's rescues, Alex sets up his own mini-Patrol and recruits Chickaletta, Cali, Turtle, and Bunny.

Pups Save Daring Danny X/Pups in a Fix
When a boy named Danny sees Ryder perform an incredible stunt during a rescue, it inspires him to become a daredevil. Changing his name to Daring Danny X, the boy attempts to jump 10 cars with his ATV.

Pups Save a Dragon/Pups Save the Three Little Pigs
The town play is sure to be a hit with Katie as a princess and Marshall playing as the back half of a dragon.

Pups Save a Goldrush/Pups Save the Paw Patroller
When a grizzled old prospector discovers gold in Adventure Bay, it's a bona-fide, dog-gone, gold rush!When Mayor Humdinger and his Kit-tastrophe Crew try to drive off in the PAW Patroller, the chase becomes a rescue!

Pups Save Apollo/Pups Save the Hippos
The Pups are delighted to be spending the whole day watching an Apollo-Super-Pup marathon on TV. When everyone but Rubble falls asleep, Apollo gets captured by his greatest foe - The Spider King.

Pups Save the Polar Bears/A Pup in Sheep's Clothing
Jake and Everest help Cap'n Turbot count polar bears, when the Flounder accidentally cracks a sheet of ice – setting a couple polar bear cubs out onto ice floes heading out to open water.

Pups Save a School Bus/Pups Save the Songbirds
When all the tires on the Adventure Bay school bus blow out, Rocky has to help repair them. Meanwhile, the kids still need to get to school, so Ryder volunteers to use the Paw Patroller.

Pups Save Old Trusty/Pups Save a Pony
Ryder has a mystery on his hands when Adventure Bay is thrown into chaos by jets of water gushing up all over town.

All Star Pups!/Pups Save Sports Day
It's monkey mayhem as pups play kickball against Raimondo's team.The All Star Pups are ready to compete in the summer sports day when Daring Danny X turns the field into an ice rink!

What do you think PAW Patrol, Vol. 5 tv serie? Can you share your thoughts with other peoples?

Really disgusted to think I am buying the whole 30 episode season and only get the first 13 episodes of the season. What a scam!

Do the pup pup boogie is one of my favorite songs from the show!

Noodle eater0067 - My little cousin could watch that

Cayden's Dad - Why iTunes, why?

On the latest episode, season 5, episode 7, the entire episode isn't available. It ends about 5 minutes early. The length of this episode is only 18 minutes, where all the other episodes are 23 minutes. Please correct this! 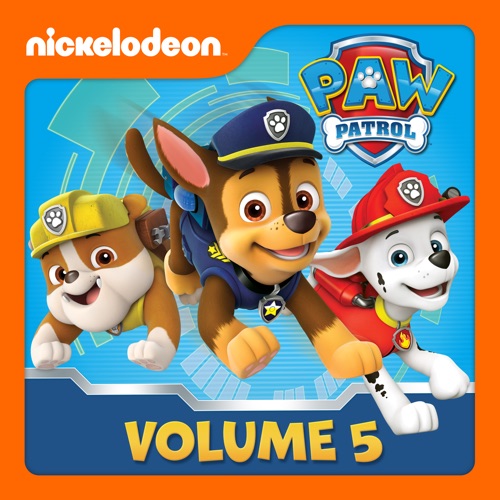