It’s PAW Patrol to the rescue! Whether they’re saving Cap’n Turbot at sea or Jake up high in the mountains, Ryder and the pups are always ready to lend a paw. Join them for 22 Adventure Bay missions as they save penguins, a dolphin pup, a space alien, and more! PAW Patrol, Vol. 3 Wiki

Pups and the Pirate Treasure
Cap'n Turbot accidentally stumbles into a secret cavern that was once a pirate's hideout.

Pups Save the Penguins/Pups Save a Dolphin Pup
Someone has been swiping fish off Cap'n Turbot's boat, so he calls Ryder and the PAW Patrol to help investigate. / Adventure Bay's newest Dolphin Pup accidentally swims into a shallow water stream!

Pups Save Jake/Pups Save the Parade
Jake and Chase go deep cave spelunking when Jake ends up getting his ankle stuck between some fallen rocks! / Adventure Bay Parade Day goes awry when Alex puts too many balloons on Katie's bathtub float.

Pups Save the Diving Bell/Pups Save the Beavers
Cap'n Turbot and his cousin Francois go deep sea diving to snap a picture of a rare seaslug! / A bad storm washes away Chompy the Beaver's dam, so he starts chomping on all the wood at Farmer Yumi's Farm!

Pups Save a Ghost/Pups Save a Show
A mysterious Ghost is causing havoc around the Lookout at night. / The Pups are going to put on a Medieval play in town square, but Cap'n Turbot's castle stage prop ends up collapsing and trapping him!

Pups Save an Ace/Pups Save a Wedding
Skye's favorite stunt pilot, Ace Soarenson, is heading to Adventure Bay to put on a fantastic air show. / Farmer Al and Farmer Yumi are getting married! Famer's Yumi's barn is being decorated for the big day and all the pups are helping.

The New Pup
The PAW Patrol rolls out in their new PAW Patroller to save Jake when he gets stranded in the ice fields, but a new pup also pops up to lend a paw: the brave ranger, Everest!

Pups and the Big Freeze/Pups Save a Basketball Game
A winter ice storm causes trouble all over Adventure Bay. / Mayor Goodway challenges Mayor Humdinger's Basketball team to a game.

Pups Save a Talent Show/Pups Save the Corn Roast
Rubble and Marshall are going to lead the PAW Patrol Band in the Adventure Bay Talent Show! / When Bettina accidentally turns a corn maze into a popcorn maze, Spy Chase and Marshall must pop to it to save Chickaletta and stop the popping corn!

Pups Leave Marshall Home Alone/Pups Save the Deer
While at the Lookout by himself, Marshall gets a distress call. / When a family of deer gets separated on slippery ice and a snowy hill, it's up to Zuma and Everest to lead an icy rescue to reunite them!

Pups Save a Friend/Pups Save a Stowaway
Feeling like his clumsy ways are constantly messing up his friend's fun, Marshall decides to take a break from the PAW Patrol. / The PAW Patrol are on another road trip in the Paw Patroller, this time to the Icy Tundra to help Jake count penguins.

What do you think PAW Patrol, Vol. 3 tv serie? Can you share your thoughts with other peoples?

waves of wonder - Love it

So good make me scream

There is an episdoe missing from this set "Pups' Jungle Trouble/Pups Save a Herd" is no where to be seen on any of the volumes. This wouldn't be so bad if it weren't for the fact that I thought I was buying all of Paw Patrol. You'd probably be better off finding them on DVD.

These volumes are not seasons, it's very confusing. I don't like how these are released in this volume form and it's hard to figure out which season/episode each one is.

The files don’t have the season filled out. This is a dumb oversight and makes whoever released it like this should feel bad. The iPad won’t sort these properly.

Noodle eater0067 - If my foster brother watches this

I will not Because this show has been on all day. 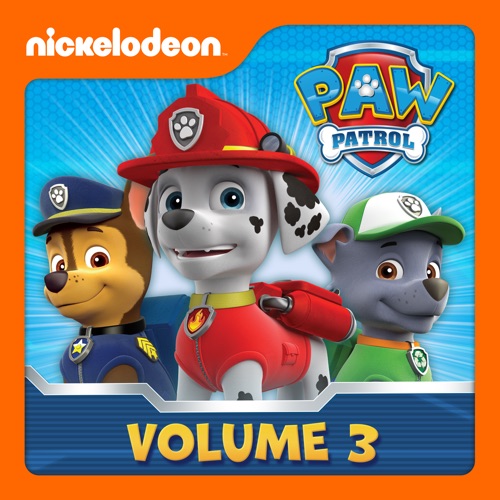