PAW Patrol is a CG action-adventure preschool series starring a pack of six heroic puppies led by a tech-savvy 10-year-old boy named Ryder. With a unique blend of problem-solving skills, cool vehicles and physical humor, PAW Patrol is sure to keep preschoolers engaged as they work together to protect Adventure Bay. PAW Patrol, Vol. 10 Wiki

Ultimate Rescue: Pups Save the Tigers
When searching for elusive rumble top tigers, the Turbots fall into a cave deep inside a volcano. The PAW Patrol does a paratrooper style rescue from Skye's Ultimate copter in this Ultimate Aviator Rescue!

Rocky Saves Himself / Pups and the Mystery of the Driverless Snocat
Daring Danny's new remote control accidentally takes control of Everest's SnoCat and all the vehicles in Adventure Bay!

Ultimate Rescue: Pups Save the Movie Monster!
Envious Mayor Humdinger tries to draw the Adventure Bay Monster Movie production to Foggy Bottom by commandeering the mechanical movie monster. But he can't control the fireball-breathing robot. All the pups join Marshall on this Ultimate Fire Rescue!

Pup Save the Trick-or-Treaters / Pups Save an Out of Control Mini Patrol
It's Halloween in Adventure Bay, and a mysterious kid in a giant spider costume is taking all the treats from the Trick-Or-Treaters!

Pups and the Werepuppy! / Pups Save a Sleepwalking Mayor
Rocky goes missing at Uncle Otis's cabin, and the PAW Patrol needs to solve the mystery of the Werepuppy!

Pups Save a Cuckoo Clock / Pups Save Ms. Marjorie's House
Jake's family cuckoo clock is sliding down the mountainside with Chickaletta stuck inside! Ryder calls on Everest to help the pups save the day!

Pups Rescue Thanksgiving / Pups Save a Windy Bay
The bouncy turkey from the Thanksgiving feast at City Hall has flown away with Mayor Humdinger and his kittens!

Pups Save a Frozen Camp-Out / Pups Save the Fizzy Pickles
Alex and Mr. Porter are on a tropical Island camping trip when a freak snowstorm hits! Mr. Porter is delivering his famous fizzy pickles to people around town.

Pups Save a Pluck-O-Matic / Pups Save a Mascot
Yumi's new Robo-Corn Plucker goes haywire, and Ryder and the PAW Patrol must get it under control! Daring Danny X, dressed as a "Bird X" mascot for the Adventure Bay, gets carried away by a couple of eagles.

Ultimate Rescue: Pups Save a Runaway Stargazer
A comet is coming, and the PAW Patrol get to work building a giant observatory! When the observatory starts rolling out‐of‐control, Rubble and the pups need to get to work re‐building everything it destroyed in this Ultimate Construction Rescue!

Pups Save Ace's Birthday Surprise/Pups Save a Tower of Pizza
Rocky and the Pups are fixing an Old‐Timey Junk Car for Ace Sorensen’s Birthday! Adventure Bay is working hard to earn the record for having the world’s highest tower of pizzas!

What do you think PAW Patrol, Vol. 10 tv serie? Can you share your thoughts with other peoples?

I like the show. But there's one episode missing. "Mighty Pups". It aired on Nov. 19 but it is nowhere to be seen on iTunes or Amazon. 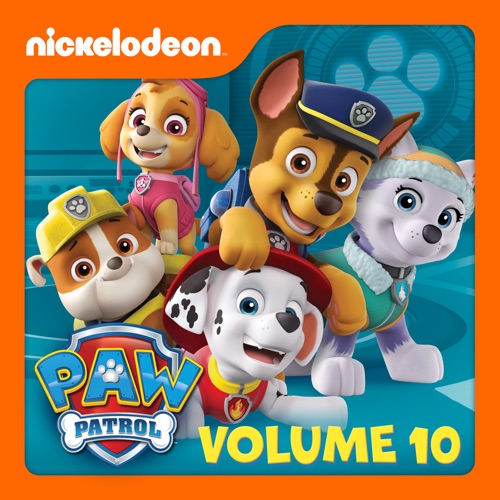