PAW Patrol is a CG action-adventure preschool series starring a pack of six heroic puppies led by a tech-savvy 10-year-old boy named Ryder. With a unique blend of problem solving skills, cool vehicles and physical humor, PAW Patrol is sure to keep preschoolers engaged as they work together to protect Adventure Bay. PAW Patrol, Vol. 7 Wiki

Pups Save a Blimp / Pups Save a Chili Cook-Out
Capn' Turbot's weather blimp is taken by Mayor Humdinger, who plans to use it to change the weather in Foggy Bottom.Mr. Porter's stove explodes right before the chili cook-off!

Pups Save a Teeny Tiny Penguin / Pups Save the Cat Show
Everest and Jake try to rescue a little penguin and end up floating out to sea.Katie's kittens are all covered in mud and running amuck! If they're not rounded up, the Cat Show will be ruined.

Pups Save a Playful Dragon / Pups Save the Critters
Buddy, the playful dragon from one of Alex's books, gets out and the pups need to get him back. / Francois's trailer unhooked, and all of his critters have gotten loose!

Mission PAW: Royally Spooked! / Pups Save Monkey-Dinger
The Princess thinks she's seen a ghost, and PAW Patrol needs to get to the bottom of it. / While on a safari the Mayor steals a magic mask which instantly turns his actions into those of a monkey.

Pups Save Jake's Cake / Pups Save a Wild Ride
Ryder and the Pups need to help get a surprise birthday ice cream cake up to Jake's cabin.Alex and Daring Danny X are snowboarding right for Risky Ridge and need help from the PAW Patrol.

Pups Save a Sleepover / Pups Save the Carnival
Farmer Al's animals go missing during a sleepover.Cornelius has escaped from the pig ride at the carnival, and the prizes have gone missing too!

Pups Save the Flying Food / Pups Save a Ferris Wheel
Mr. Porter's delivery drones have gone out of control, and now they are air-dropping food everywhere!Mayor Humdinger steals Adventure Bay's Ferris Wheel.

Mission PAW: Pups Save the Royal Throne
Sweetie plans to steal the actual royal throne, so she can rule.

Sea Patrol: Pups Save a Baby Octopus
A baby Octopus gets separated from its mother and sinks the Flounder. Sea Patrol needs to save the day!

Pups Save the Runaway Kitties / Pups Save Tiny Marshall
The Kit-trastrophe crew gets into the poufy shampoo and blow away! Marshall dreams he gets shrunk.

Pups Save Big Hairy / Pups Save a Flying Kitty
Pups need to lure a big ape onto the PAW Patroller so they can take him back to the jungle. Skye Kitty gets stuck beside an eagle's nest and needs help getting down.

What do you think PAW Patrol, Vol. 7 tv serie? Can you share your thoughts with other peoples?

This Show is Nothing but What happens if You make a Rip Off To Wonder Pets. The dogs are annoying (Except Everest, who deserves to be A Wonder Pet), And I prefer Puppy Dog Pals than this. Do not watch Paw Patrol! Watch Wonder Pets instead!

Amara😊 - MY BABY COUSIN/BROTHER LOVES IT

My little brother, 3, he watches this show every day! He can’t stop talking about Marshall! He has EVERYTHING paw patrol related! He wakes up to paw patrol, he goes to sleep with paw patrol! He even has a Marshall stuffed animal😍 thank you for providing this show Nickelodeon!!!! If it wasn’t for this show, what would Elias watch?

My son loves paw patrol, this season is above the rest. I appreciate that this is a good kid friendly show, where they work together to accomplish a common goal 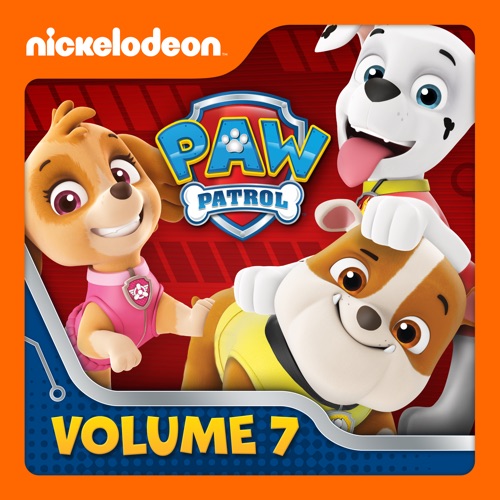